Professor Iram Siraj-Blatchford defines it as an episode in which two or more individuals (children together, or adults and children) ‘work together’ in an intellectual way to solve a problem, clarify a concept, evaluate activities or extend a narrative etc.

We have been extremely busy solving problems in Yellow Room this term. Last week, Neve ran up to a group of children listening to ‘The Three Billy Goats Gruff’ being read by Victoria and shouted, “Stop and Listen everyone…Baddies are coming over the fence towards our Pre-School!”

The group of children gasped in shock and we quickly began formulating our plans of how to stop them. The children seemed extremely excited by this and they began shouting out their ideas;

“Maybe we could build a giant spider web to get the baddies stucked!”   Willow H

“Maybe, if we hold hands together we can make a giant fence to stop to baddies from getting us!”   Arlo

“When we go up the trees, we will catch them with ropes and guns and get them on the roof and then they will die”  Rio

“Or maybe we could call the Police? Ring ring…ring ring… Hello Officer, please can you come and catch the baddies? Bye!”       Neve

We made our way into the garden as the adults in the room guided the children through their ideas, extending their thinking through questioning, testing out ideas and reflecting together on whether they worked or not. “Oh no the baddies are still coming!” they shout out and try more ideas. 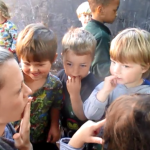 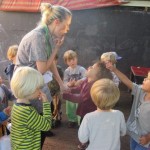 “My idea is to fly in an aeroplane and fly down and then we will crush them up!”       Albert

The exploration led us into the bushes and hiding behind the trees. One child had an idea of throwing messages over the fence to tell the Baddies to stop. The group of children decided to go back into the classroom to source mark making materials to write letters and messages for the baddies.

“Or we could shoot them with blood”     Willow noticed red pen marks on her hand. 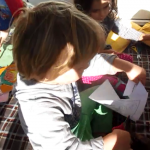 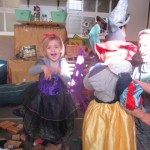 When we finished making our marks we ran back over to the bushes and wondered how we were going to get our messages to the baddies. Albert threw his paper aeroplane over the fence and the others thought it would be best to hide them in the bushes for the baddies to find. We then took refuge back in the classroom, when Neve suggested we could dress up in Halloween costumes to scare the baddies away. The children began collecting various dressing up outfits and starting dressing themselves. Some children couldn’t find a costume, so decided that the best option was to growl and roar at the baddies to scare them off. The group ran outside into the garden, showcasing their excellent acting skills and pretending to be scary.

After a while, we ran back to the bushes check if the baddies received our messages and each located their pieces of paper. Victoria picks up her letter and tells the group that the baddies have written to us, “Hello Humans, can we be friends?” The children stand in awe and wonder and seem excited to make friends with our imaginary beings.

This role-play scenario took place throughout a whole morning session and some children are still creating new ideas to stop the baddies now! Sustained shared thinking is very important to us at St. Werburgh’s Park Nursery School. As a team we work creatively to enable every voice to be heard and every idea to be valued. Through imaginative explorations like this one, children develop skills in so many different areas of learning and build foundations for learning together.